Africa: Ultra-rare black leopard is photographed for the first time in century 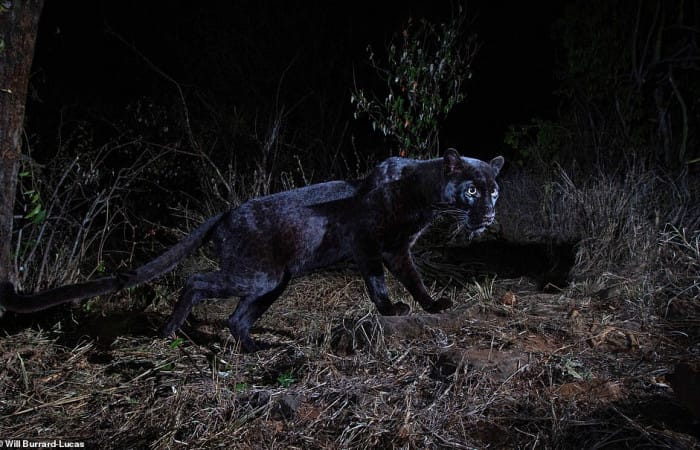 A total black leopard, one of the rarest cases in the wild nature, is photographed for the first time in a century in Kenya, Africa. The unique photos were received thanks to the collaboration of the local biologists from San Diego Zoo and British wildlife photographer Will Burrard-Lucas, Guardian reported.

Ultra-black leopard’s images were taken in a well-protected area where the black leopard was rumoured to frequent after dark. The net of installing camera traps helped scientists to get the images of a beauty predator.

After learning that several had been spotted in the Laikipia area of Kenya – the only area thought to have black leopards in all of Africa – photographer Will Burrard-Lucas decided to investigate further and set up an expedition this January. His efforts were crown by the success, a British wildlife photographer has become the first person to photograph the black leopard in more than a century.

To catch an animal in the dark is a rather complex task but the innovative technologies are extremely helpful. Burrard-Lucas set up a Camtraptions camera trap that included wireless motion sensors, in the hope of photographing the animals at night, leopard’s time.

In a video documenting his photography expedition, Burrard-Lucas explains: ‘As far as I know none of these leopards has never been photographed properly in Africa before… So I’ve left the cameras for a few days and now I’m heading back to see if I’ve got anything.’

Black leopard photos are wonderful and rare: ‘They are truly stunning, beautiful and elusive’

A Kenyan photo work by Burrard-Lucas exploded the wildlife community, Nicholas Pilfold wrote an article in the African Journal of Ecology about the new photographic evidence captured by a British photographer. The conservationist from the San Diego Zoo reiterated in his article that photos are unique and beautiful.

“Collectively these are the first confirmed images in nearly 100 years of a black leopard in Africa, and this region is the only known spot in all of Africa to have [the] black leopard,” Pilfold added.

The African wildlife experts say that they had always heard about black leopard living in this region, but the stories were absent of high-quality footage that could confirm their existence. ‘This is what Will’s photos and the videos on our remote cameras now prove, and are exceptionally rare in their detail and insight,’ said the conservationists from the Laikipia Wilderness Camp in Kenya.