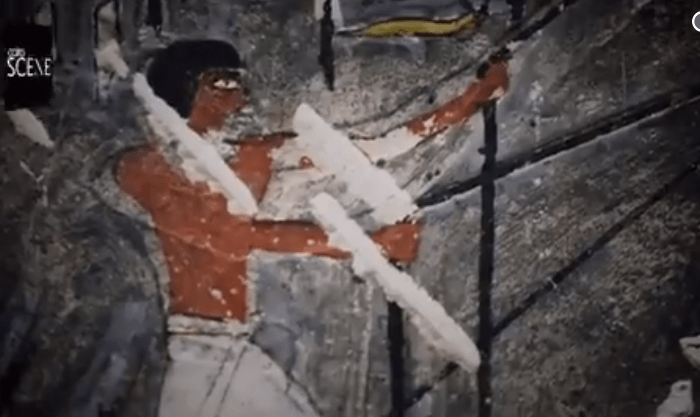 Egyptian archaeologists announced another unique discovery, a well preserved 4,300-year-old tomb was found in Cairo’s vicinities. As ITV reported, the L-shaped discovery was made in March in Saqqara on Monday.

The tomb is L-shaped, said Mohamed Mujahid, head of the excavation team. It has the tiny corridor leading down to an antechamber, beyond which is a larger chamber with walls covered in painted reliefs that show a high-ranking fifth dynasty official called Khuwy. The unique tomb symbolises the power and wisdom of Khuwy, the archaeologists explained.

the freshly-discovered vast, ancient burial site served as the necropolis for the Ancient Egyptian capital, Memphis. but the most impressive thing in it is the unbelievable vivid colours that survived more than four millennia.

According to the Egyptologists, Khuwy was a nobleman during the period spanning the 25th to the 24th centuries BC — around 1,000 years before Tutankhamun.

The vivid colours of the tomb are really impressive

The Ministry of Antiquities wrote on Twitter that several paintings remain fresh and brightly coloured, that looks amazing and absolutely magical.  The interior kept their initial colours despite the passage of time, in shades associated with royalty.

Features such as these have made archaeologists question the relationship between Khuwy, an official, and Djedkare Isesi, the pharaoh of the time, whose pyramid sits nearby.

One theory is that Khuwy and Djedkare Isesi could have been related, while others say the tomb’s unique design is the result of the pharaoh’s reforms of state administration and funerary cults.

Egypt’s minister of antiquities Khaled al-Enani took a party of foreign ambassadors and other officials to inspect the tomb. The ministry also hopes that the discovery will shed more light on the enigmatic King Djedkare and his influential 40-year reign.