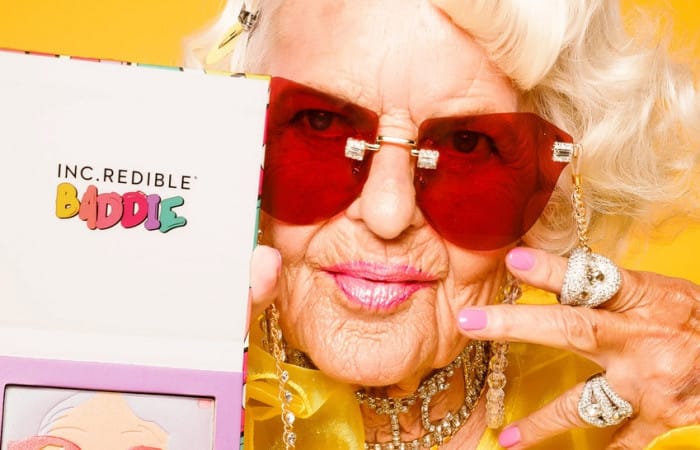 The line includes three products, reports Bustle.com. They are the rollerball lip gloss, highlighter and sheet mask for breasts. The prices range from $9 to $18. INC.redible Cosmetics based the makeup products’ design on the appearance of Baddie Winkle.

Helen Ruth Elam Van Winkle is a flamboyant grandmother. At age 90 she became the popular Instagram blogger with more than 3.8 million followers. The woman uses popular teenage styles of different epochs. Baddie Winkle likes bright, rainbow-patterned outfit. This preference is reflected in the design of her new makeup line. The surface of highlighter has the relief of the woman’s face.

All products aren’t just another colorful toy. They include vitamins and useful compounds, which would help to maintain and improve the skin condition. For example, the lip gloss includes vitamin B12. The sheet mask for breasts works as the facial analogue. It contains vitamin C and moisturizing compounds for the skin around woman’s nipples.

Baddie Winkle gladly promotes such products despite her age. The woman believes any of these features shouldn’t stop a person from the self-expression.

«If somebody judges me on how I look or what I do, then believe me I just ramp up my rainbow,» Winkle says in the press release. «Rule number one take pride in you.»

The makeup line would be sold on Sephora.com.

There is a different situation at the opposite end of the age scale of social media stars. The 19-year-old makeup expert, James Charles, decided to cancel his tour, which included the stop  at the Rabobank Theater. The decision was made because of the controversial posts on social media, reported kget.com. Charles should appear in Bakersfield July 24.