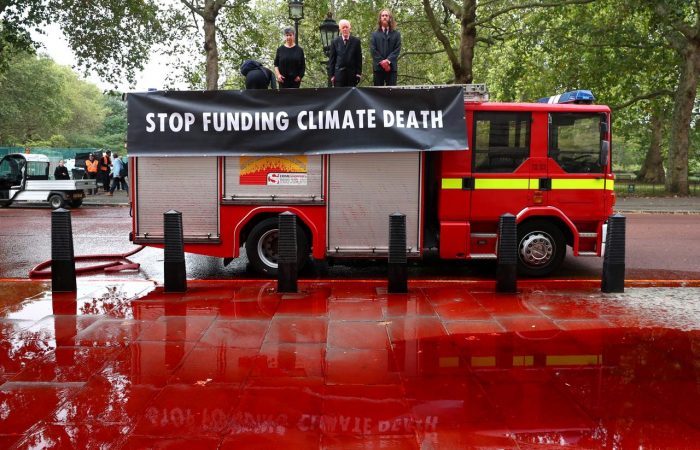 Climate change activists, members of Extinction Rebellion cell, have sprayed red paint at the facade of the British finance ministry on Thursday. As Reuters reports quoting the activists, the red colour should symbolize the blood.

The climate change activists expressed their displeasure with the activity of the British Treasury. According to them, the governmental body is responsible for climate warming in developing countries. That is why the activists drove to the building of Treasury on Thursday in a fire engine and sprayed red paint through the hose onto the building.

After the stunt, the facade and the pavement were totally red-painted, and four activists stood atop the fire engine which had a banner saying «Stop funding climate death.» The steps of the Treasury were soaked in red paint.

The cell Extinction Rebellion stressed that the stunt was well-prepared, its activists had sprayed 1,800 litres of fake blood at the Treasury.

Later on, the activists also sprayed the slogan «Stop funding climate death» on the walls of the building.

According to one of the activists, named ben, the Treasury has been frustrating efforts by other government departments «to take action against climate change because it cares only about economic growth».

«It doesn’t see that eternal economic growth leads to climate death,» Ben said. «The red symbolises the people dying now in the global south and also the people who are going to start dying from climate change all around the world if we do nothing,» ben added.

Activists from different cells are continuing to draw attention to climate change. The Extinction Rebellion group disrupted London with 11 days of protests in April that it cast as the biggest act of civil disobedience in recent British history. Iconic locations were blocked, the Shell building defaced, trains stopped and Goldman Sachs targeted.

Greta Tunberg and her followers try to intensify their efforts to fight for a better world. However, the only results of those stikes are the traffic collapse or spending extra-money for cleaning streets and building after vandalization by the climate activists.

On Thursday, one protestor said the red paint symbolised deaths caused by climate change in developing countries, fuelled by the pursuit of economic growth in rich nations like the UK.