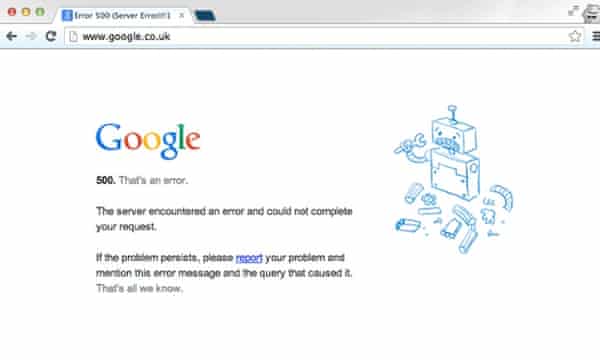 The most popular online services from Google are experiencing the world down on Monday, Bloomberg has learned.

The outages around the globe are preventing people from accessing Gmail, YouTube and other popular Alphabet Inc’s products during a few hours on Monday. Errors range from “something went wrong” on YouTube, to “there was an error. Please Try again later. That’s all we know,” when attempting to login to gmail.

Google products were failing to load for users in the USA, the UK and across entire Europe. So far, Google has not updated its page dedicated to performance statuses of the aforementioned services. Thre is no data, which allows indicating any of Alphabet’s services are down. the tech giant hasn’t commented yet.

In fact, outages are not uncommon for huge corporations like Google, Apple, Amazon or Microsoft. But Monday’s outage is notable for its pervasiveness across the Alphabet portfolio. Google’s main revenue driver remained visible in results, suggesting advertising was unaffected.

A spokesperson for Google didn’t immediately respond to a request for comment.

The website DownDetector, which collates user-reported errors on websites, mobile networks and other platforms, was showing tens of thousands of complaints around 07:00 a.m. in New York, extending to Google’s office tools such as Drive and Meet, Google Maps, and Google’s smart home products such as Nest.