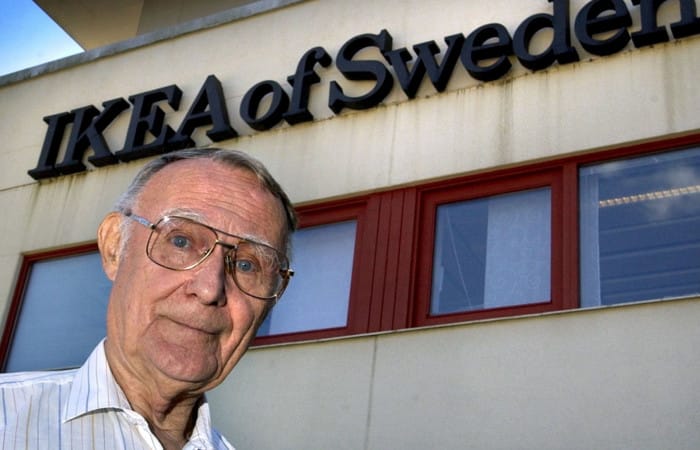 The Swedish billionaire Ingvar Kamprad who founded IKEA dies at 91, the company has announced. IKEA started in 1943 and now has 389 stores worldwide.

The company called Mr Kamprad “one of the greatest entrepreneurs of the 20th century”, saying the founder will be much missed and warmly remembered by his family and Ikea staff all around the world. The 91-year0old billionaire died peacefully after a brief illness at his home in Smaland, southern Sweden.

In an interview in the 1980s, Mr Kamprad said that his vision for Ikea was that it would be a company that would make life easier for its customers. The Swedish young man founded the firm in 1943 at the age of just 17, he pioneered flat-pack furniture, which became extremely popular later.

Mr Kamprad was born on 30 March 1926, he started selling matchboxes to neighbours from his bicycle as a child. He found that he could buy them in bulk cheaply from Stockholm, and sell them at a low price, but still make a good profit.

Young and ambitious entrepreneur began Ikea when he was 17-years-old, expanding his catalogue to watches, Christmas decorations and pens and pencils, which he sold by mail order from his garden shed.

In 1950, Mr Kamprad started selling furniture made by local manufacturers in the forests close to his home. But the company only became popular in 1956, when it pioneered flat-pack furniture, which is lauded for helping democratise good, modern home design.

The most important thing is the furniture design and Kamprad’s creations radically changed how people made and designed products for the home. Their life became much easier, the furniture in Scandinavian style at an affordable price gives an opportunity to mix and to create.