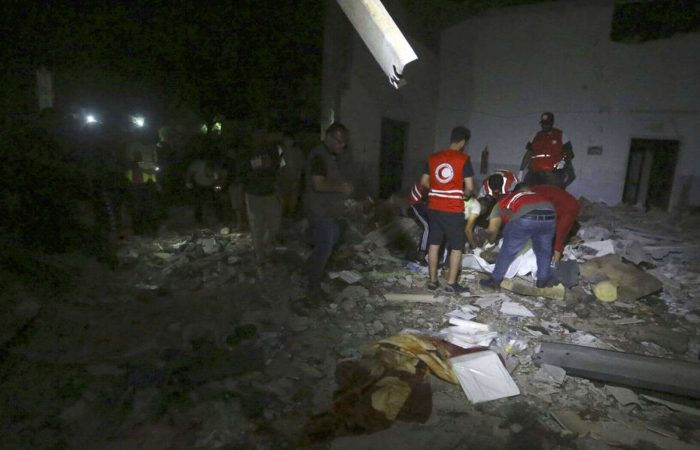 Lybian capital, Tripoli, remains the epicentre of the active actions of both LNA and government forces. General Khalifa Haftar and his Libyan National Army are responsible for the airstrike that killed at least 40 on Wednesday early morning.

Tripoli-based government urged the UN support mission in Libya to establish a fact-finding committee to investigate the airstrike that took lives of 40 migrants and injured 80. Haftar’s forces airstrike hit a detention center for migrants in Tripoli early Wednesday, killing dozens of people.

Malek Merset, a Health Ministry spokesman, condemned Gen Haftar’s decision and posted photos of migrants being taken in ambulances to hospitals from the detention centre, which houses 616 migrants and refugees.

Photos and footage circulating online showed blood and body parts mixed with rubble and migrants’ belongings inside the bombed building.

A spokesman for Haftar’s forces has not yet commented on the airstrike. Since April, the LNA continues the offensive against the weak Tripoli-based government. As of today, the Lybian strongman’s forces control much of Libya’s east and south.

LNA has warned on the airstrikes

On Monday, the LNA warned it starts the air campaign on rival forces in Tripoli after it lost control of Gharyan. Haftar’s forces boast MiG fighter jets supplied by Cairo, as well as drones, attack helicopters and mine-resistant vehicles. It was not immediately clear what munitions were used in the airstrike early Wednesday.

According to General Khalifa Haftar, his mission is simple and understandable — restoring stability to the North African country. He is backed by Egypt, the United Arab Emirates and Saudi Arabia while his rivals, mainly Islamists, are supported by Turkey and Qatar.

His critics view Gaddhafi’s general as an aspiring autocrat and fear a return to one-man rule.

The UN refugee agency has said that more than 3,000 migrants are in danger because they are held in detention centres close to the front lines between LNA and the militias allied with the Tripoli government.