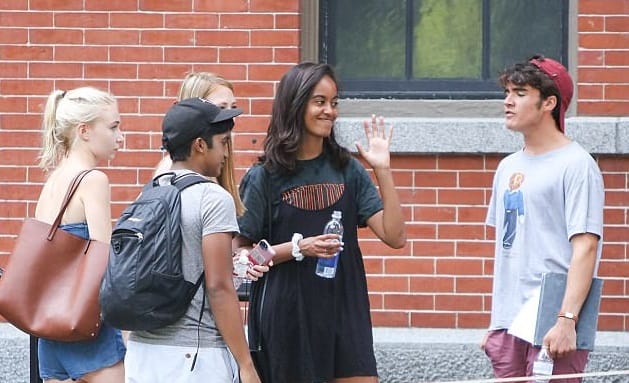 Malia Obama has just moved into her dorm room at Harvard University, the day was an extremely emotional for both parents, Michelle and Barack. The eldest daughter of an ex-president of the US is opening a turning new page of her life.

Tha daughter of Obama couple moved into Harvard University, the girl decided to take a break with a gap year since graduating high school in 2016. Now, she is a student whose parents were spotted in Massachusets, on Monday. Barack and Michelle helped a daughter in her moving in for her first year at the Ivy League school.

Malia had toured several Ivies before deciding on Harvard, she also looked at Princeton, Brown and the University of Pennsylvania. From the very beginning, Malia is a celebrity in Harvard, many photos and videos of the Obamas around Harvard Square have circulated on social media this week.

On Monday, one Facebook video showed Malia Obama and her parents leaving the Harvest restaurant as Mr Obama waved to onlookers.

Harvard’s first day of classes is Aug. 30, so Malia and other students will have enough time to meet each other and to prepare their minds for the intensive learning. The first year at the University is the most complex but it is the most interesting one as well. Mid-August is the beginning of many college move-in days in Massachusetts, and Malia Obama is one notable incoming freshman has already settled in.