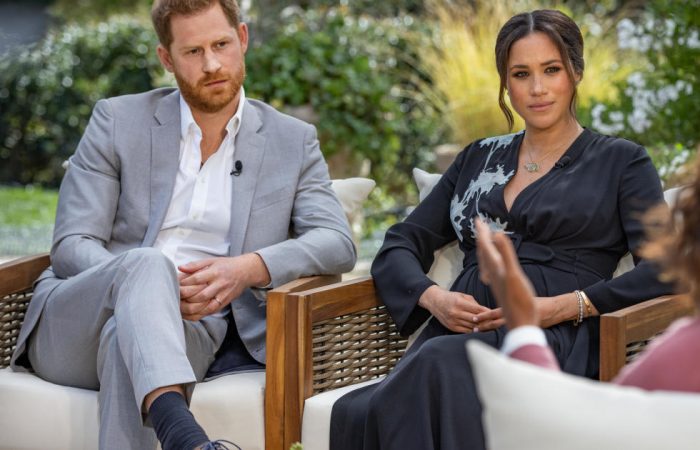 Prince Harry and his wife didn’t appear to be happy during their TV tell-all interview with Oprah. While her channel is boosting, the Sussexes have ruined their reputation, Guardian has learned.

Duke and Duchess of Sussex don’t look “that happy” with their new Californian life, a DailyMirror’s royal editor Russell Myers claimed. After two weeks as the royal duo had done “an awful lot of damage” gave their bombshell interview with Ms Winfrey, it is hard to say that their life is careless or happy.

Meghan and Harry sat down with the megapopular Oprah and sensationally claimed an unnamed member of the Royal Family expressed concerns about the skin colour of baby Archie before he was born.

In his efforts to support his wife, Harry also added that his dad had cut him off. Moreover, telling out all secrets of the royal family, Queen’s grandson said that he was only able to make the move thanks to money his late mother, Princess Diana, left him. Harry is a 36-year-old married man, and such claims sound a bit weird, in fact.

the bombshell interview with pregnant Meghan in tears and moaning Harry has divided the world. Due to the racism issue, in fact. Queen’s supporters defend Her Majesty and the royal family, while others support biracial Ms Markle and her claims. Whatever, the Sussexes reputations were “absolutely destroyed” after revealing so many details.

“It’s an absolutely extraordinary turn of events and I didn’t think they looked even that happy,” Russell Myers said.

Commenting on the interview, the Queen said all issues raised in that chat, including the subject of race, would be discussed “by the family privately”.