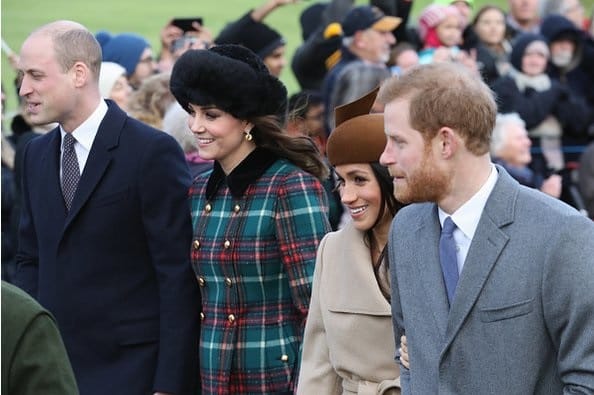 Meghan Markle did it! The American actress joined the British royal family at church. Prince Harry and his brother Prince William, Kate Middleton and Queen were showing the delight from the traditional Christmas service at the Sandringham church.

The American fiance of Prince Harry is getting a more powerful woman, year by year. If last Christmas the Britons were rather unhappy with such a girlfriend of the Harry, this year brought o the actress the success. Meghan Markle joined Harry and the rest of the family for church services in the English countryside.

The 36-year-old Meghan and her groom-to-be Prince Harry walked to the Church of St. Mary Magdalene with the Cambridges while four-year-old Prince George and two-year-old Princess Charlotte stayed home to enjoy their presence.

Meghan donned a tan coat, brown suede boots and a dark brown wool beret for the chilly morning walk, looped her hand in Harry’s arm as they followed closely behind Prince Philip. Prince William and his pregnant wife Kate Middleton, who wore a festive plaid coat and black hat, held hands as they walked beside the newly engaged couple for their first official appearance together as a foursome.

Royals and Christmas: traditions should be unbreakable

If royal tradition from previous years was followed, the family will have exchanged presents on Christmas Eve and awoken to a stocking of small gifts and fruit at the end of their beds.

The Queen and Prince Phillip also attended an early Holy Communion service at the church. They will return home for a traditional turkey lunch, before watching the Queen’s speech together.

It is still unclear, how long Meghan, who also joined Harry at the Queen’s pre-holiday lunch for the extended Windsor family at Buckingham Palace on December 20, is staying on the estate – and if the animal lover will join avid hunter Harry in the annual Boxing Day pheasant shoot on December 26.