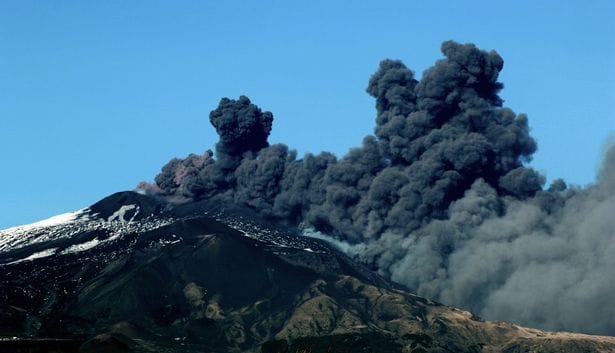 Mount Etna’s volcanic ash covered nearby villages on Sicily, while planes into Catania airport had to be halted temporarily, BBC reported on Tuesday.

Due to 3,330-metre high volcano Etna’s erupting and sending a huge ash cloud into the sky, the Air Live warned its passengers that Catania airspace was closed at 13.00 UTC. the local observatory confirmed lava had spewed from a new fracture near its south-eastern Etna’s crater.

There were no reports of any injuries or tragic incidents due to the eruption, however, an airspace sector is now reopened to allow the arrival of 4 aeroplanes per hour. Actually, Etna is not a calm or sleeping volcano, it is rather gravitationally unstable, say the experts. Mount could burst into spectacular action several times a year, spewing lava and ash high over the Sicily, but its last major eruption was in 1992.

Europe’s most famous volcano was already known to be edging slowly towards the Mediterranean. the geological survey showed the movement is mainly being driven by it collapsing under its own weight – a phenomenon known as “gravitational instability”.

This has caused one of the sides of the notorious mountain on the east coast of Sicily to weaken, increasing the risk of a devastating tidal wave. Previously it had been commonly assumed the lava bubbling inside was the root cause.