Pope Francis washed the feet of inmates, revealed he has cataracts 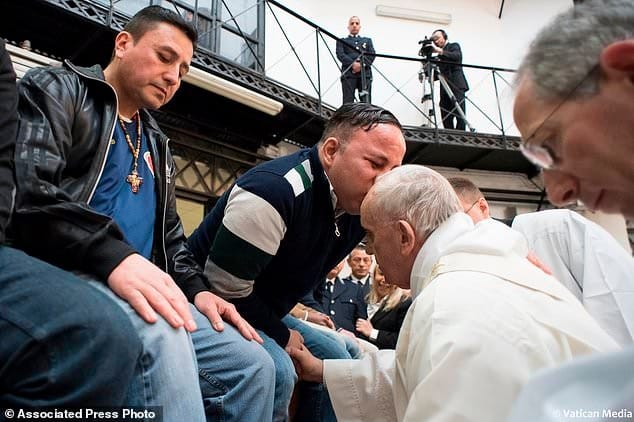 Pope Francis with his washing the feet of inmates at a Rome prison on Thursday gave a start to the special and intense four days of activity leading up to Easter Sunday.

On Holy Thursday, the pontiff paid a visit to inmates and staff at the Regina Coeli prison where he washed the feet of inmates. That is an old good tradition for Pope to make the people’s lives better. During washing the feet, Francis urged to never let mates’ hopes be clouded like cataracts cloud the eyes. Saying that Pope revealed he suffers too from the worsening his eyesight but he has a hope to make a surgery for cataract next year.

The 12 inmates included Catholics, Muslims, an Orthodox Christian and a Buddhist, the Vatican said. They hailed from Italy, the Philippines, Morocco, Moldova, Colombia, Nigeria and Sierra Leone.

The 81-year-old Pope uses his visits to prisons to encourage inmates not to lose hope, and he repeated that Thursday by telling the prisoners that they must clear their eyes every day so they can see and spread hope.

“At my age, for example, cataracts come and you don’t see reality well. Next year I have to have an operation,”

Francis said and asked all of them to do a daily cleansing of their view on life, that may help them in future to avoid the “cataract surgery for the soul”. When hope is alive, life makes a sense, reminded pontiff and blessed the inmates and staff at the Regina Coeli prison at Rome.

Pope Francis has cataract, sciatica, and iron will

Earlier Thursday, Francis presided over another Holy Thursday service in St. Peter’s Basilica, where he urged priests to be spiritually close to their flocks and not insist only on preaching laws when they sin.

Pope Francis is known to suffer from sciatica, which sometimes makes walking difficult. He lost much of one lung due to an infection in his 20s but otherwise seems to enjoy good health. During the foot-washing ceremony, Francis knelt down and one by one, poured water over the feet of the 12 inmates, wiped them dry and kissed them. Most of the men then embraced the pope in thanks.

In his homily, Francis told them the ritual is meant to show his willingness to serve others “like a slave,” as Jesus did.

“Your chief must be your servant,” he said. “So often I think … how many wars would have been avoided if all those kings, emperors and heads of state had understood this teaching of Jesus rather than command and be cruel and kill people.”