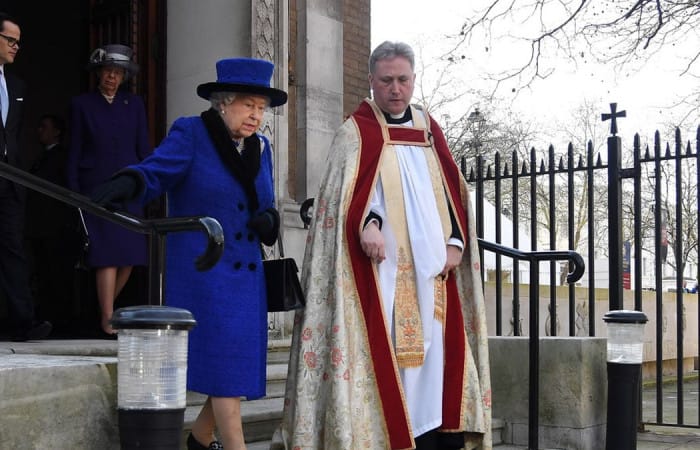 Queen Elizabeth II attended a service to celebrate the centenary of the granting by King George V of the prefix ‘Royal’ to the Royal Army Chaplains’ Department. The monarch appeared in the sapphire blue coat and well-coordinated hat at the Guards’ Chapel, Wellington Barracks, London.

Queen has marked the service to mark the special occasion for the Royal Army Chaplains’ Department. The 92-year-old monarch looked stylish and bright when she arrived to congratulate the chaplains from the royal department. Over several months, the royal family news concentrated on her grandson’s family: Prince Harry and his wife are expecting their first child in April.

In this regards, Queen Elizabeth II is reportedly worried about Meghan Markle’s ongoing family feud, according to the royal expert Angela Mollard. She revealed in the “Royals” podcast that Her Majesty might see the Duchess of Sussex’s family drama as a nightmare because there is no immediate resolution in sight. For Queen whose private and family life wasn’t so easy, the tensions between father and daughter look very unnatural and strange. The tensions have started after Meghan met Harry and became stronger after her becoming a royal.

“The Queen has just had the family operating well, all on message, all marrying well! Now Harry’s gone and married someone who has a history that is bringing difficulties to the family… The monarchy in some respects is always vulnerable, it’s an institution that relies on public opinion,” Ms Mollard said.

The expert suggests that Meghan’s rift with her dad, Thomas Markle Sr., may be dispiriting for Her Majesty because she spent her life working towards stability. Being a loving mother and grandmother, Queen also wants the members of the royal family to act appropriately. In fact, the feud in Markle’s family definitely has much deeper roots than Thomas Markle wants to show. After all, it’s the parent’s responsibility to determine the relationship with their child, not the child’s responsibility. Thomas Markle is failing her on every account.