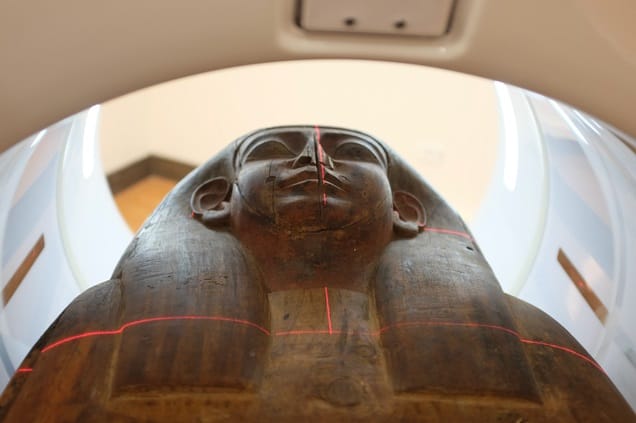 Australian Archaeologists at the Nicholson Museum made the surprising discovery when they lifted the lid on the ancient coffin and uncovered human remains.

The experts of the oldest university museum in Australia found a mummy inside an ancient coffin assumed to be empty. According to the archaeologists, the hieroglyphics on the coffin indicate it was made for a priestess called Mer-Neith-it-es. The unbelievable discovery made the scientists happy despite the mummy was not fully intact and the remains were disturbed.

To record the contents of the coffin as accurately as possible, the team took it to the Macquarie Medical Imaging unit at the Macquarie University Hospital for a CT scan. The resulting images were astonishing, and the scans revealed two mummified feet, complete with toes.

Sydney museum experts point out that sometimes mummies are discarded from their original coffin for later use. Egyptian antiquity sellers would sometimes put another mummy inside if a customer requested it.

The radiologists and archaeologists are busy now with unravelling the mystery of who is really in the coffin by using 3D models. Professor John Magnussen said that the mummy is older than the experts thought before. Moreover, it’s got some early degenerative changes and the sacrum is fused, so archaeologists know it’s definitely an adult.

Thanks to the scans, the remains are of an adult aged over 30 and show that the feet and ankle bones were largely intact, Professor Magnussen suggested.

Another interesting discovery made by Egyptologist Connie Lord was the similarity between the cast and the one found in the coffin of Egypt’s most famous mummy – Tutankhamun. Lord noted the resin poured into the mummy’s skull after the brain was removed.

“It’s just an incredible find, I don’t remember anyone finding something like this. It would have to be incredibly rare,”

The quest to identify the remains could take months or even years. The Mer-Neith-it-es coffin will be exhibited in a new museum on the university grounds set to open in 2020, alongside three others owned by the university museum.