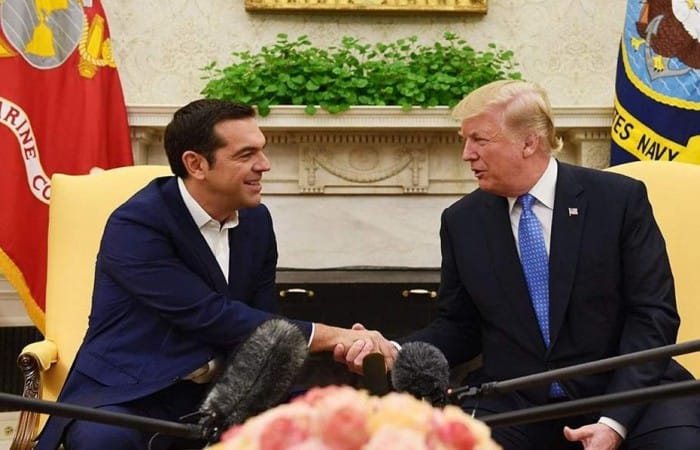 President Trump welcomed Alexis Tsipras, the premier minister paid the customary introductory visit to the White House, the Greek prime minister came to discuss a “responsible debt relief” plan for his country and to vouch for American support on this vital issue.

Donald Trump said the people of the United States stand with the Greek people as they recover from the financial crisis. None of the leaders prefer to recall how Mr Tsipras described Mr Trump during 2016 US election: “I hope we will not face this evil”.

On Wednesday, the Greek prime minister and his American friend discussed the important aspects of the foreign policy and financial support to Greece. President Trump said the US and Greece shared “common values” and this approach may help the countries to bridge any differences. The American leader encouraged the PM in his continued implementation of reform.

Additionally, POTUS has totally reaffirmed American support for a responsible debt-relief plan for Greece. Mr Tsipras, the first western leader not to wear a tie in a public appearance with Mr Trump, was happy with the results of the visit to the White House:

“The meeting that we had was very productive. Not a moment did I feel threatened at any time,”

During the brief, Donald Trump praised Greece for being one of the few NATO nations to meet the goal of spending 2 percent of its gross domestic product on defence. In the frame of its mutual agreements, the United States would help Athens upgrade its fleet of F16 fighter jets.

Mr Tsipras was following in the footsteps of world leaders who have paid the customary introductory visit to a new US president, and used his trip to urge investors, and particularly Greek-Americans, to invest in his country as it recovers from the crippling debt crisis.