Duchess of Cambridge, Countess of Wessex to host stars at a glittering Buckingham Palace reception 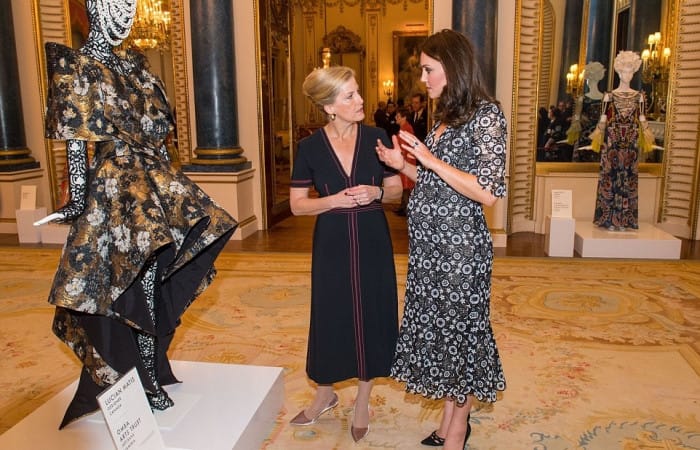 The Royal family’s best-dressed ladies hosted a reception to celebrate a new creative initiative, the Commonwealth Fashion Exchange where Kate extended a hand and greeted the fashion editor Anna Wintour who was not wearing her signature sunglasses. Among the guests were spotted other legends of the fashion industry – Kate met with British Vogue’s editor-in-chief Edward Enninful, designer Stella McCartney, and supermodel Naomi Campbell.

The White Drawing Room became a place of meeting for many guests like Anna Wintour and Livia Firth. Also in the party was Daniel Halton, director of the Commonwealth Fashion Exchange, who was wearing an eye-catching headdress with the word Commonwealth spelt out.

Duchess of Cambridge and Countess of Wessex made their way into The Music Room where a selection of the stunning dresses made as part of the exchange had been put on show. Sophie very much took charge, confidently handling the fabric of a dress made by Lucian Mathis, followed by Kate.

The Commonwealth Fashion Exchange aims to create partnerships between established and emerging fashion talent in the lead up to the Commonwealth Heads of Government Meeting (CHOGM) in London this April.

The Commonwealth Fashion Exchange celebrates creativity, sustainable production and manufacturing, trade links and ethical supply chains across the fashion industry, from business and design, to textiles and fabrics, craft and artisan skills.