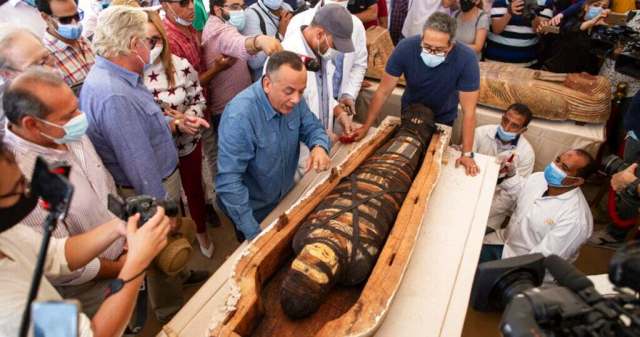 Egypt’s Tourism and Antiquities Minister Khaled al-Anani has confirmed Saturday that the archaeologists found 59 sealed sarcophagi at the Saqqara necropolis.

Three shafts containing dozens of ancient coffins were discovered near the famed pyramid of King Djoser by the Egyptian archaeologists. Over a last decade, Egypt has stepped up the search for ancient artefacts in an attempt to revive its battered tourism industry.

The recently-discovered artefacts formed a large collection of intact and well-preserved coffins at a major necropolis near Cairo that date back 2,600 years, said Khaled al-Anani on Saturday.

“I have witnessed the opening of one of the coffins … the mummy seems as if it was mummified yesterday,” the minister added.

According to the archaeologists, there were other layers of coffins at the necropolis that would be unearthed. All coffins are in very good condition and retain their original colours thanks to the dry Saqqara climate.

Khaled al-Anani said they belonged to a group of priests and top officials from ancient Egypt’s Late Period. In addition, scores of statuettes, including a bronze one for god Nefertum, and amulets were also dug up at the site.

The new artefacts will be displayed at the Grand Egyptian Museum

According to the Tourism and Antiquities Minister, the recently-discovered collection will be put on display at the Grand Egyptian Museum, being built next to the Giza Pyramids, together with three other 3,500-year-old wooden coffins unearthed from al-Asasif necropolis in the southern city of Luxor.

The experts say that the coffins belonged to priests and clerks from the 26th dynasty, said Mostafa al-Waziri, secretary-general of Egypt’s Supreme Council of Antiquities.

Since the moment of Arab Spring, which brought chaos to the North African region, Egypt has stepped up the search for ancient artefacts in an attempt to revive its battered tourism industry. Over the decades, the touristic sector remains the main source of national income.