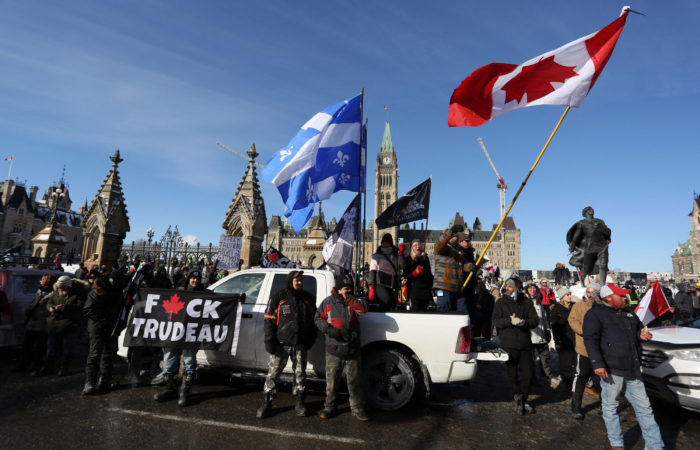 Canada’s mass protests have a great impact on the province authorities. Saskatchewan will stop requiring coronavirus vaccine passes and masks. It comes as PM Trudeau has insisted on the effectiveness of COVID-19 mandates amid trucker protests gripping capital Ottawa for the second week in a row.

Saskatchewan province said it would stop requiring e-health passes starting next. Following the mass protests in Ottawa, the authorities decided to allow the mask mandate to expire at the end of February. In other words, it’s the first Canadian province to offer a roadmap to ending the coronavirus restrictions. “I can understand frustrations with mandates, but mandates are the way to avoid further restrictions,” the prime minister told reporters.

Meantime, premier Scott Moe noted that they created “two classes of citizens,” arguing that “the benefits of this policy no longer outweighs the costs.” The official also urged Canadians not to “judge” their neighbours over their immunization status. Moe added that people should be entitled to decide whether to get vaccinated or not.

“This government is going to respect that right,” he added.

In Alberta, residents no longer are required to provide proof of vaccination in public places today. From Monday next week children aged 12 and under would no longer be required to mask up. Compulsory masking will no longer apply to all students in schools.

“We’ll never be able to do a full accounting of the extent of the pain and hardship that restrictions have caused,” premier Jason Kenney said.

PM Trudeau has refused to meet with the truckers or hear their demands, referring to them as a “small, fringe minority” engaged in violence and hateful conduct.

In a speech to the parliament on Monday, he accused the truckers of “trying to blockade our economy, our democracy, and our fellow citizens’ daily lives,” and demanded that their protest “has to stop” because the people of Ottawa and Canadians in general “deserve to get their lives back.”

On Tuesday Trudeau defended the mandates and restrictions his government put in place during the pandemic, saying that they worked and will not be removed any time soon.