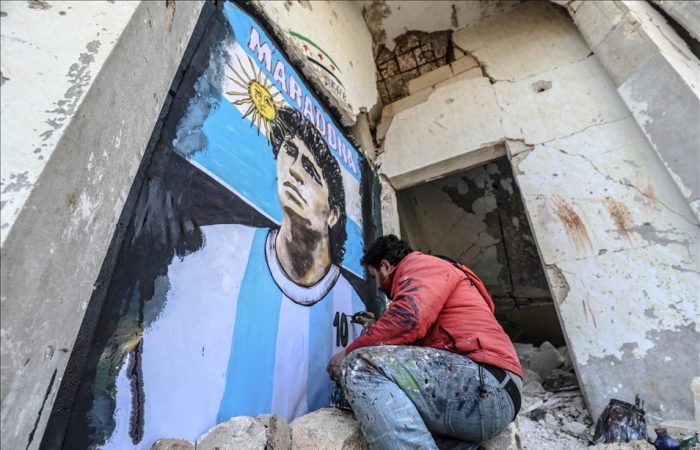 A Syrian graffiti artist has created a graffiti on the wall of a house collapsed following strikes of al-Assad regime Anadolu Agency has learned. Al-Asmar wanted to immortalize the Argentinian athlete who passed away on Wednesday.

Being a fan of the legendary Argentinian football player, the Syrian graffiti artist paid a tribute to Maradona. His image appeared on the wall of a house collapsed following airstrikes in Idlib.

Aziz al-Asmar earned his reputation for painting international and local agenda items on walls of ruined houses following regime strikes, and his latest work is devoted to Diego Armanda Maradona, who passed away.

“As people of Idlib, we drew Maradona’s picture on walls collapsed by Assad regime and its supporters,” Aziz al-Asmar said.

Many Syrian people used to be admirers of Maradona while he was playing like a god and even later. Those fans have lost their houses to the regime strikes, and Aziz wanted the global community to be aware of this. Maradona’s portrait on the ruins should draw attention to those people.

Syria has been embroiled in bloodshed since early 2011 when the Bashar al-Assad regime cracked down on pro-democracy protests with unexpected ferocity. Ten years of the armed conflict cost lives to thousands of people. At least 5 million civilians have become homeless.