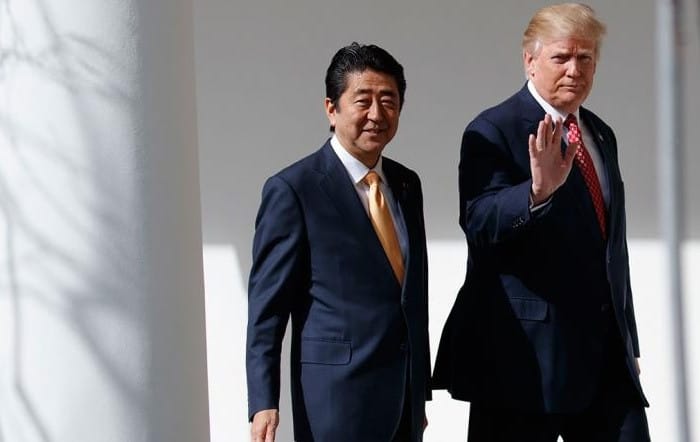 Japan’s prime minister Shinzo Abe and the US leader hold the talks, during which PM Abe has faced ‘two unpleasant options’, trade discussions with the United States will definitely go on the second round, CNBC reports.

The first round of Japan-US trade talks started on Thursday in Washington, and Donald Trump’s Office has the upper hand as it’s “wielding the threat of automobile tariffs pretty effectively.” According to the officials from both sides, his time, they better understand each other’s positions on trade, including car tariffs. It is worth to note that Japan is among countries targeted by Trump’s policies aimed at reducing the trade imbalance between the U.S. and its trading partners.

Bilateral talks between Japan and the US is a great opportunity for both countries’ economies. According to Japan’s Economy Minister Toshimitsu Motegi, both sides had “a frank exchange of views”, he also reiterated Japan’s view that multilateral talks, which the US has abandoned, are the best way to address trade issues.

The US position on trade with Japan

Car exports to the U.S. are a key source of growth for Japan, accounting for around 1 percent of the country’s gross domestic product, according to trade statistics from both countries. The U.S. has said it’s considering imposing tariffs of up to 25 percent on auto imports, which would hurt demand for Japanese cars.

“I think Japan now finds itself in a position where it has to choose between accepting those tariffs — which I think are unacceptable — and possibly making concessions in the areas that could be politically difficult for Abe. So they’re going to a find a way to thread the needle between those two unpleasant options,”

‘Thorough and constructive’ discussion the American and Japanese leaders had on Thursday, allowed the office of U.S. Trade Representative Robert Lighthizer to say in a statement that officials from both countries “had a thorough and constructive exchange of views on all bilateral trade issues” and “understand each other’s conditions for further discussions and plan to move forward with additional talks.”