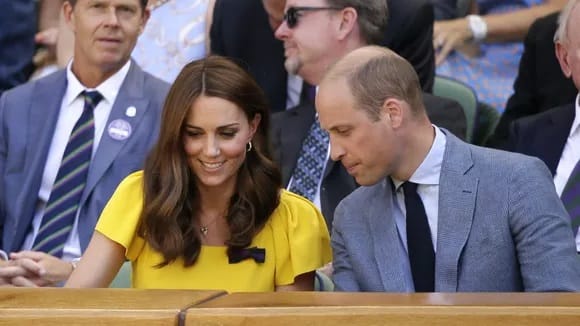 Kate Middleton’s Dolce and Gabbana yellow dress is guaranteed to stand out on the screen when the Wimbledon finalists’ pause for a breather between rallies and the cameras inevitably pan to Duchess of Cambridge in the crowd.

Duchess Kate attended Centre Court on Sunday to watch Novak Djokovic take on Kevin Anderson in the Wimbledon men’s finals. The bright Dolce and Gabbana dress looked good and stylish, securing the status of ‘sunshine dressing’ as one of the summer’s key looks. Different shades of yellow become the most popular trend of this season.

The mum-of-three looked fantastic in a summery canary-yellow dress, which had a similar silhouette to the cream polka-dot dress with short sleeves she wore Saturday when Duchess Kate was watching Angelique Kerber defeat Serena Williams for the women’s Wimbledon title. On Sunday, Duchess of Cambridge returned to the royal box with husband Prince William to see Novak Djokovic’s duel with Kevin Anderson.

Duke and Duchess of Cambridge pass British Prime Minister Theresa May as they attend the men’s singles final on July 15, the prime minister also couldn’ miss the most important tennis event of the year.  Among other celebrities who are huge tennis fans were Pierce Brosnan, Amber Heard, Jeanna Coleman and Benedict Cumberbatch. This year, the Wimbledon men’s finals were impressive and unbelievable thanks to the wonderful skills of Novak and Kevin whose wives were also attending the final match.