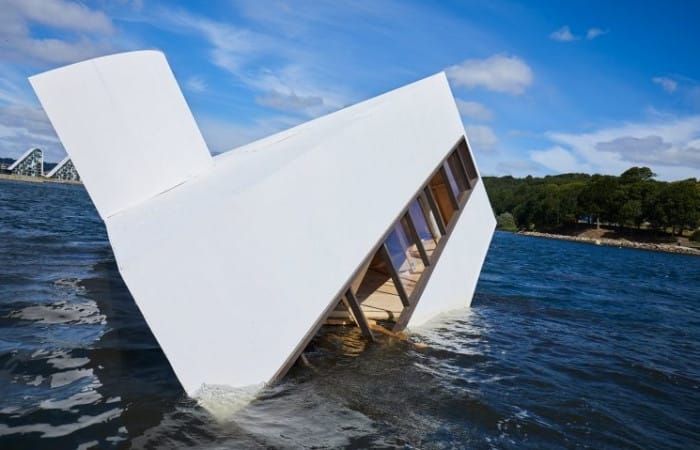 Asmund Havsteen-Mikkelsen has sunk a scale model of one of Le Corbusier’s most famous buildings Savoye in a Danish fjord.

The Danish artist sunk the model of Le Corbusier’s house as a statement about the Brexit vote and Donald Trump’s election. That Flooded Modernity is one of 10 works on display at the Floating Art Festival on the Vejle Fjord, an art and architecture event organised by the Vejle Museum in Denmark.

Havsteen-Mikkelsen’s sculpture is a 1:1 replica of a corner of Le Corbusier’s Villa Savoye that appears partially submerged – as if the building is sinking beneath the water.

According to the artist, it is a symbol of how the values of modernity have been swamped by technology. The recent scandal with Cambridge Analytica is one of the moments that inspired Asmund Havsteen-Mikkelsen for creating a sinking house in the blue water.

Many artists are using the different sides of the social life to accent the important milestones in the humankind’s development. The Scandinavian artists’ free spirit is known as an endless source of inspiration, one of the brightest examples is the recent Flooded Modernity.