Pope Francis urges: Lift up your hearts, put down your phones 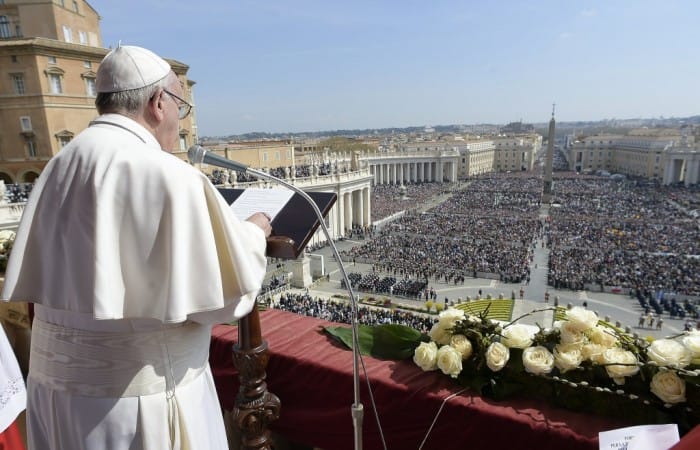 Pope Francis during the Wednesday Mass offered the people to lift up their hearts, to see each other, to communicate directly. In other words, the pontiff called to put down the smart devices, at least, during Mass.

Pope Francis noted that the gadgets like phones and pads mean for the modern people much more than the live communication. The remarks were part of his weekly teachings and readings to a crowd of some 13,000 people at St. Peter’s Square in Vatican City. The subject is a personal one for the pontiff.

“It is a very ugly thing. It pains me greatly, when I celebrate Mass here in the square or in the basilica to see so many cellphones raised,”

Pope went on in Italian and added that gadgets are the real problem even for some priests and even some bishops. In his address, Francis stressed that the Mass is not a spectacle, it is going to the passion and resurrection of the Lord. After this tirade, some in the crowd applauded Pope’s message while the rest presumably had their hands occupied by their cellphones.

The effects of technology in Pope’s speech

In 2016, Pope Francis has already touched the aspect of the phones and different effects of the technology. Francis strongly believes that shared smartphones cannot replace the need for more personal and direct dialogue, which requires physical presence.

‘We know that sometimes they can keep people apart rather than together, as when at dinnertime everyone is surfing on a mobile phone, or when one spouse falls asleep waiting for the other who spends hours playing with an electronic device,’

In other news, the pontiff decreed that beginning next year, the Vatican will no longer sell cigarettes.

“The reason is very simple: the Holy See cannot contribute to an activity that clearly damages the health of people,” Vatican press office director Greg Burke explained in a statement.

“Although the cigarettes sold to employees and pensioners in the Vatican at a reduced price are a source of revenue for the Holy See, no profit can be legitimate if it puts lives at risk.”