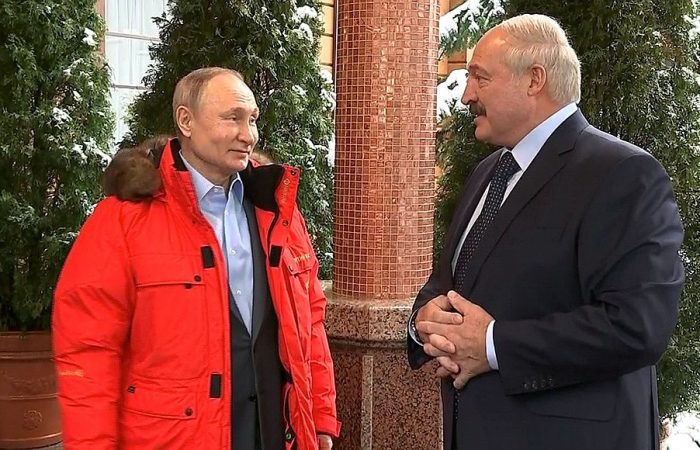 On February 7, Presidents of Russia and Belarus held talks in Krasnaya Polyana in vicinities of Sochi city resort. The national leaders have discussed the ongoing cooperation in the energy sector as well as perspectives of renewable energy sources.

Russian President welcomed his Belarusian counterpart Alexander Lukashenko for economic talks in Sochi on Friday. After the brief exchange, the presidents proceeded to a bilateral meeting, where they were due to discuss the development of cooperation between Moscow and Minsk.

The talks of two nations’ leaders were held in two rounds. The first one involved a limited number of members of the delegations — an aircraft with Russian officials was unable to land at the local airfield due to difficult weather conditions. The second round was held after a break for a hockey game.

To summarize the meeting, Deputy Head of the Presidential Executive Office Dmitry Kozak said that talks were held in a positive constructive. The presidents agreed to continue consultations at the level of governments. Meanwhile, the ministries and agencies in the energy sector will continue to improve the mechanism of integration.

After Sochi meeting, both Russia and Belarus have agreed to supply natural gas in 2020 on the terms of 2019 ($127 per 1 thousand cubic meters at the border). And oil discounts for Belarus are possible only in case of introduction of state regulation of oil supplies, believes Deputy Head of Presidential Administration.

“Crude oil prices are formed by the market and are not regulated. All this will remain. But we’ll provide all possible assistance in achieving these agreements to provide Belarus with the necessary volumes of oil,” said Mr Kozak.