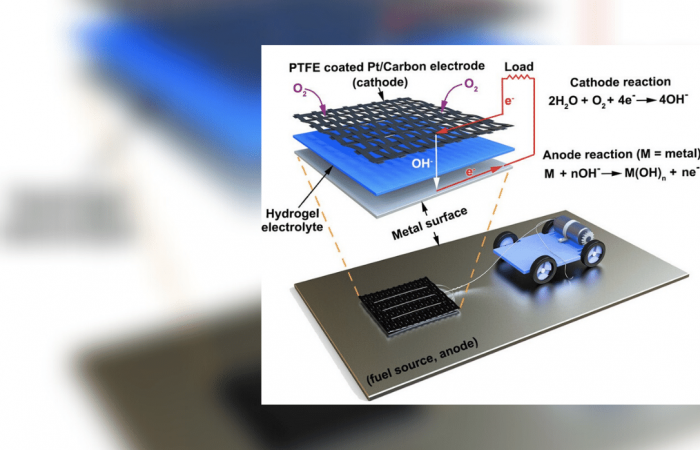 The robot prototype invented in the laboratories of the University of Pennsylvania’s School of Engineering and Applied Science recharges by chowing down scrap metal as it moves around.

The new approach embodies an attractive alternative to lithium-ion batteries, as it will allow robots to recharge on-the-go by consuming parts of nearby metal surfaces, say the researchers.

The engineers have designed a robot prototype that ‘eats’ metal to harvest energy. Although the smart robot still has much to evolve, it works well. The innovation consists of a small hydrogel dragged behind a miniature motorised vehicle. The hydrogel works as an electrolyte, so that nearby metal surfaces act as the anode of a battery, Springwise reports.

The idea of robot that ‘eats’ metal as simple as genial. This allows electrons to flow to the cathode and produce different energy densities, depending on their individual potential for oxidation. The vehicle also has a small reservoir that provides water to the hydrogel to prevent it from drying out.

In fact, a major hurdle for present robots in real-world environments is that they rely on batteries which store energy internally and have the issue of being heavy and offering a limited supply.

Nowadays, there are some very impressive innovations in the world of robotics, and scavenger robots have impressive potential in different fields. For instance, to improve search and rescue, medical treatments, and industrial maintenance, today’s lithium-ion batteries only last for five minutes.

The point is, at the rate that current lithium-ion batteries are progressing, the scavenger robot could be a long time before they operate for even 15 minutes.

The new approach means that robots could recharge by consuming parts of nearby metal surfaces; a small robot would need only the top 100 micrometres of a metal object to do so.