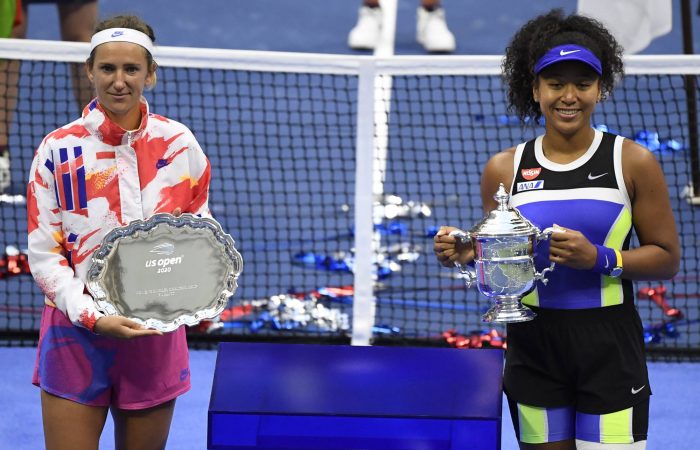 The Japanese tennis star, Naomi Osaka, won her second US Open title. Despite there weren’t any fans at all in the midst of the coronavirus epidemic in New York, the final match was really tremendous.

Naomi Osaka and Victoria Azarenka showed the emotional and mature game on Saturday. However, the Japanese national bounced back from a shaky start to prevail 1-6, 6-3, 6-3 at Arthur Ashe Stadium in New York.

Osaka spent the last two weeks in New York dictating just about every facet of every match. At the start of the final, she got a taste of how it felt to be on the receiving end of a dominant performance.

The unseeded Azarenka set the tone early with a break in the opening game, capitalizing on an ill-timed Osaka double fault to draw first blood.

Naomi Osaka thanked her fans for support, writing the warm words on her Twitter.

Kei Nishikori and Martina Navratilova were the first colleagues who congratulated Naomi with her next outstanding victory. «Social justice and sports do mix — and quite nicely- congratulations,’ the great Martina wrote.

Naomi decided to start every round of the US Open with the name of Black people Black American victims of racial profiling and police brutality to each of her matches. The names of Elijah McLain, Ahmaud Arbery, Trayvon Martin, George Floyd and Philando Castile followed on her face masks.

Matching Osaka’s power shot for shot and moving her younger opponent around the court at will, the Belarussian broke (again) in Osaka’s 3rd service game to take a commanding 4-1 first-set lead.

The Japanese athlete showed her first sign of frustration in the 6th game of the match, throwing her racket onto the court when she made what was already her 11th unforced error. Altogether she piled up 13 errors in the first set and was broken three times in the rout.