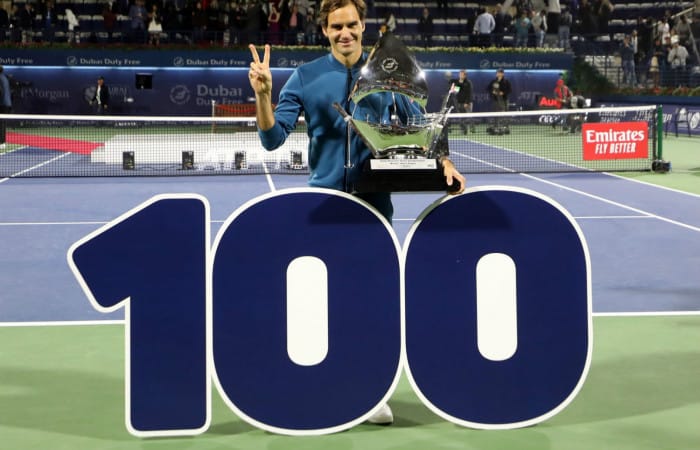 Roger Federer, a Swiss tennis legend, has won his 100th title in the career. The “special, magical” achievement was registered on Saturday in Dubai, PerfectTennis reported.

Tennis superstar Roger Federer reached the landmark in the Dubai Championship final, the victory becomes his eighth trophy at the prestigious Gulf event. It is worth to note that it took 18 years to achieve the 100-title landmark, the first title Roger captured in Milan in 2001. Symbolically, Federer’s 99th trophy had come last October at his home event in Basel.

The incomparable Swiss tennis player is the winner of a record 20 Grand Slam titles who said that he’s not particularly targeting the 109-mark of Connors: “A lot of people always ask me about, ‘Are you going to go for 109?'”, said Roger. The athlete opened his secret, he said that a real champion has to be fit on many fronts: mentally, physically. All those wish to win have to be able to beat different types of players: beat them all on successive days. Being asked how to win all the time, Roger answered:

“To answer the question is not easy. Winning five matches in six days or five matches in five days, it takes a different type of fitness. You can play a great tournament, play a brutal semi, you get unlucky sometimes with the schedule, whatever it may be.”

Another tennis superman, Connors, set his record during his glory years in the 1970s and 1980s, he wrote a congratulating message to the Swiss colleague.

“Welcome to the ‘Triple Digit’ tournament victory club @rogerfederer – I’ve been a bit lonely – glad to have the company,” wrote the American athlete whose record is still unbeatable.

The Swiss Federer, who remains a long way back from the all-time mark of 167 titles set in the women’s game by Martina Navratilova, said that his two-decade longevity was key to the title century.

“It’s a deep satisfaction, an immediate one. A lot of people always emphasise all the Slams, but I play on the ATP Tour. This is where I’ve won so many of them. Been around for so long,” Roger explains. The athlete added he doesn’t rest between Grand Slams all the time like people think I might be. Apparently, the 100th title reached in Dubai proves that. Last week was a very exciting one for Federer, no doubt.