Trump-Kim summit ends early over disagreement on US sanctions 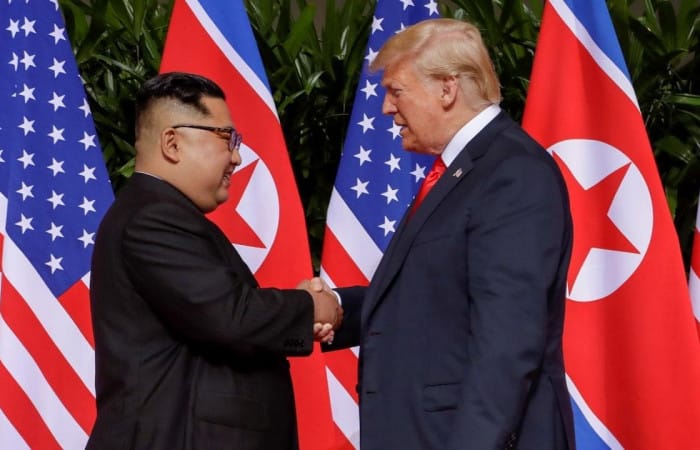 Trump-Kim summit has ended abruptly due to President Trump’s unwillingness to drop the sanctions from North Korea, Guardian reported on Thursday. Both national leaders have prematurely ended their talks in Vietnam after reaching a standstill on the degree of denuclearization.

The collapse of Trump-Kim talks came suddenly despite the detailed plans for negotiating sessions, a working lunch and a signing ceremony for a joint agreement. According to Mr Trump, the deal had broken down because Mr Kim wanted complete sanctions relief for dismantling the main nuclear complex at Yongbyon, but the White House wanted a totally different thing. On Thursday, that disagreement becomes the stumbling block for the summit in Hanoi.

The unexpected final to the Trump-Kim summit left no plans for a third similar meeting, but Washington has expressed willingness to continue talks at a lower level.

After the summit was called off on Thursday, the signing ceremony was cancelled and the official lunch left uneaten. Table settings and name cards went unused in the empty dining hall of the Metropole Hotel, the summit venue, as the leaders made their way back to their own hotels.

Commenting on the summit results, Donald Trump wrote on Twitter that it was about the sanctions basically. “They wanted the sanctions lifted in their entirety and we couldn’t do that … Sometimes you have to walk, and this was just one of those times,” the US President added.

Meanwhile, the abrupt ending of Trump-Kim summit shocked South Korea. The breakdown of the meeting is a political disaster for President Moon who had been counting on the progress that would lift international sanctions restricting trade and investment between two Koreas.

“It was shock. We are trying to figure out what happened. We need to watch what happened behind the scenes,” a South Korean diplomat said Seoul was stunned by the result.