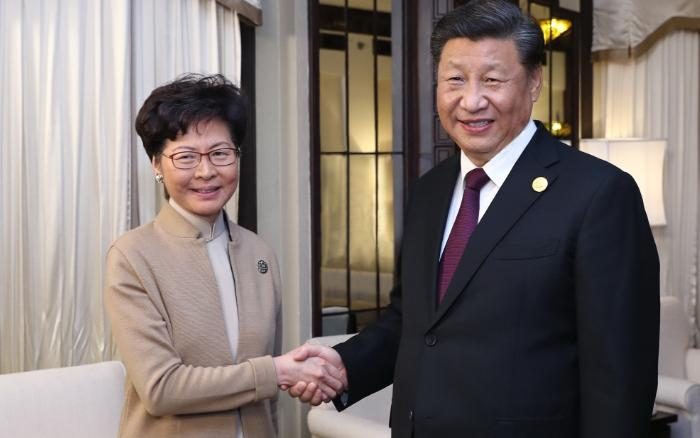 Сhinese president Xi praised Mrs Lam despite months of violent protests on her watch in Hong Kong. The leaders had a meeting in Shanghai where they both came for the 2019 China International Import Expo. In fact, neither leader had announced the meeting was planned before it took place.

President Xi sees Hong Kong as the Asian financial hub, so, he strongly believes that the street protesters should punish to avoid a similar situation in future. The local authorities should «to safeguard the well-being of the general public in Hong Kong,» the Chinese state-run news agency Xinhua reported. Xi also had demanded «unswerving efforts» to end the violence as well.

The Asian financial hub faces the most complex situation ever, the controversial China extradition bill caused the mass protests in June. The unrest has plunged the former British colony into a recession and damaged the tourism industry.

Last month, the Chinese government dismissed reports that it was planning to remove Carry Lam from her role early in 2020 due to widespread dissatisfaction over her handling of the protests. In Hong Kong, a total of 325 people were arrested on protest-related charges during the latest spate of violence at the weekend, the local police confirmed.

Protesters shut down major roads and disrupted public transport. Some protesters also firebombed Xinhua’s Hong Kong headquarters — an act condemned as «barbaric» in a statement by the state-run news agency.

On Tuesday, President Xi addressed the international guests at the CEEI, saying in his keynote speech that business needs a safe and secure situation.

«The Chinese civilization has always valued peace under heaven and harmony among nations. Let us all work in that spirit and contribute to an open global economy and to a community with a shared future for mankind,» the Chinese leader said on Monday.