Rob Kardashian posts a public apology to his women, Dream and Blac Chyna

Rob Kardashian is one of the famous family members, this young man became a father one month ago, so, he got a bunch of wonderful reasons to PR. Last Saturday, he presented to the public new family scandal based on the split with his fiancée Blac Chyna.

Rob Kardashian’s girlfriend Blac Chyna left him and took their one-month-old daughter with her. In fact, the move came after Chyna’s Instagram was hacked, and very interesting plans of Chyna were revealed. As a matter of fact, screenshots of messages were posted between her and her friends, detailing Blac’s plans to allegedly leave Kardashian after a year.

Of course, Rob instead of being a man and behaviour like a man started a stupid messaging in the social media. All the celebs do this, and Rob isn’t an exclusion. Here is a lamentation of poor Rob but later Kardashian deleted it:

‘Sorry to be so open but I’m not feeling so good after seeing @blacchyna messages about me and what her plans were. I have never been this heartbroken in my life.

I don’t mind being so open or if anyone thinks I’m being weak but I don’t play when it comes to Family and Chyna was my Family and thought we were getting married. I treated her as a Queen.

My baby girl is 1 month old and Chyna took her and left this beautiful home that I just bought for us. Right before Christmas.’

Finally, in the best traditions of the celebs media-scandal, Chyna regrammed Kardashian’s first Instagram, suggesting the apology had been accepted. 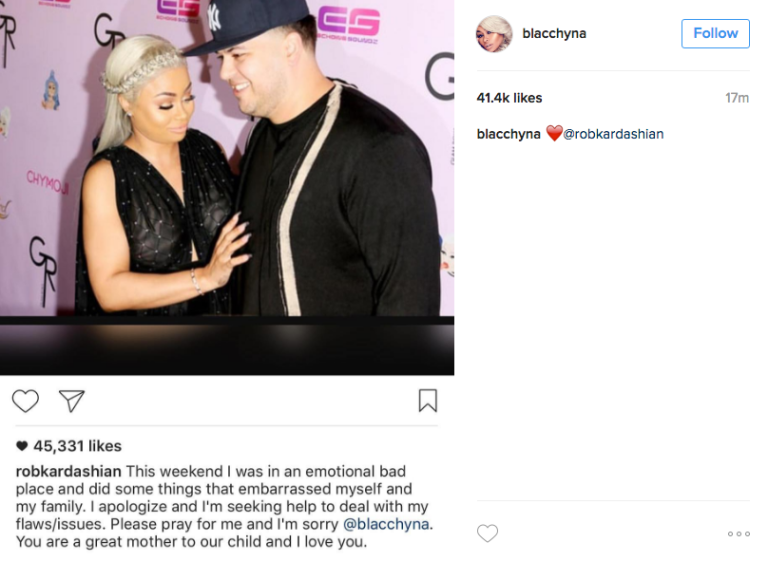