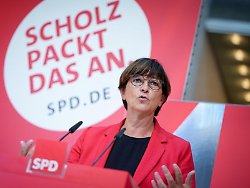 Party co-chairman Saskia Esken said that former German chancellor Gerhard Schroeder should be expelled from the SPD for continuing to cooperate with Russian state-owned companies.

“We need to stop thinking of Schroeder only as an ex-chancellor, because he has been in business for many years,” says Esken.

Esken believes that after the start of the special operation in Ukraine, the politician should have stopped working in Russian state concerns. After the start of a special military operation for the denazification and demilitarization of Ukraine, which began on February 28, 2022, Schroeder was subjected to powerful criticism in Germany. He was repeatedly threatened with expulsion from the Social Democratic Party, and the current Chancellor Olaf Scholz called it wrong that the politician continues to work in Russian companies.Last year, Rosneft’s board of directors re-elected Schroeder as chairman.